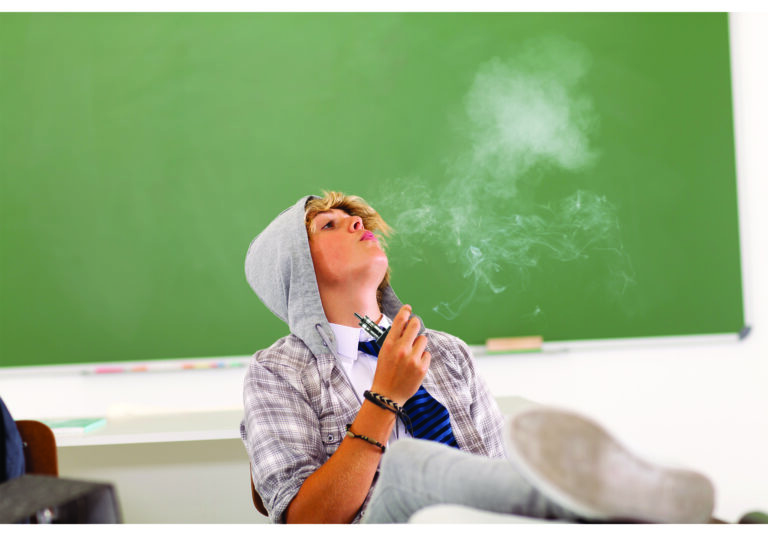 Much like the days of students sneaking off into bathrooms and locker rooms for a smoke, students are vaping in the most common areas on school grounds. By installing vape detectors, it is possible to monitor the air quality for any abnormal compounds that are emitted from vaping devices. Unlike cigarette smoke, e-cigarettes emit an aerosol vapor. However, the aerosol can’t be detected by an ordinary smoke detector. Instead, vape detectors measure the content of air for harmful chemicals, alerting faculty when and where students vape on school property.

The harmful effects of inhaling secondhand smoke are well-known, but “vapor” is no different. Secondhand aerosol that is emitted by vaping products contains high concentrations of ultrafine particles of toxins, carcinogenic chemicals, nicotine and THC. It’s easier for the particles in secondhand aerosol than cigarette smoke to enter the respiratory system, which can cause lung tissue damage, asthma, cancer and increased risks of heart and pulmonary problems. By installing vape detectors, school districts can track the activity of vaping on campus and can help decrease health problems for students who vape and those who do not.

Research has pointed out that the ingredients in vaping products hinder the development of adolescent brains. Adolescence is an important stage in life for students as their bodies and minds develop and adapt until early adulthood. As adolescents, they are more prone to makings decisions based on emotional or reactive responses, rather than logical reasoning, making teens more likely to take risks. If a student develops an addiction to drugs, developmental instability increases. The regions of the brain that are responsible for concentration, memory, neuroplasticity and cognitive decision-making are largely affected by nicotine. Thus leaving a significant impact on students’ learning and overall health due to negative effects of brain development when exposed to toxins.

It’s not uncommon to see different school districts implement different programs to inform the young masses about the effects of drug usage and how to avoid or quit those habits. With the recent influx of hospitalizations and deaths caused by vaping distributing the message to encourage avoiding addiction would be an effective tool in regulating student vaping activity. With more cases reported, students could become wary and avoid or quit vaping altogether. Faculties should also learn how to identify e-cigarettes and vaping devices, some of which resemble a USB flash drive.

5. Discourage the Transition to Other Gateway Drugs and Addiction

Installing vape detectors would be crucial to keeping students away from accessing other drugs. Vape devices contain nicotine which is a highly addictive substance. Vaping companies target the youth and use their marketing tactics to persuade them into purchasing their products. Not only do vape devices contain nicotine, but many students are obtaining “vape juices” containing THC, the ingredient found in marijuana.

School faculties should consider reaching out to parents about the benefits of placing vape detectors on school grounds. If parents have concerns about their child becoming affected by vaping, it is best for school districts to explain the known effects to parents. This way parents can warn their kids about the dangers that come from vaping. Therefore, allowing parents and schools to address their concerns in appropriate manners, such as seeking out drug counseling if necessary. Parents and educators are key influencers to students, so it is important for them to take the issue of school vaping seriously.

The rate of vaping has increased over the past decade, so research about the harmful effects continues as more cases of vape-induced illnesses are reported. There is not enough information about the long-term consequences and health effects to vaping, but a common vaping symptom is significant respiratory conditions, which can escalate if vaping habits are not broken. There have also been cases of seizures resulting from vaping, which research shows comes from the chemicals and toxins inside of e-liquids and secondhand aerosol.

Installing vape detectors in schools will help lead to the creation of more ideas to help regulate vaping laws. Recently, discussions about restrictions of vaping products have been on the rise. Some ideas that have been discussed include raising the legal age to purchase vaping products from 18 to 21, and banning the sale of e-cigarette flavors used to entice children and teens into vaping. Other states have taken action by proposing legislation to help regulate vaping, such as enforcing tax rates and retail licensure on e-cigarettes. Some retailers have also decided to stop selling e-cigarettes altogether.

Vape detectors can be a pricey investment, but how can we put a price tag on public health? If the wellbeing of students is an important matter to the community, then this cost-effective piece of technology will be worth the purchase price for improving and saving lives. Investing in vape detectors can also lower the cost of damages from accidents caused by malfunctioning batteries in e-cigarettes, such as fires and explosions.

10. Show Students and Parents the School is Serious About Taking Action to Stop Student Vaping

Installing vaping detectors and adults giving lectures can only do so much for students. A key factor that is linked to substance abuse is peer influence. This acts as a main source of why students acquire vaping devices. If friends are a key component to access vaping habits, then they are also the solution to preventing them. Speaking to a friend about the rising rates and problems can be a starting point to help them quit. In relation to school vaping, the simplest of solutions can have a great impact upon our society.